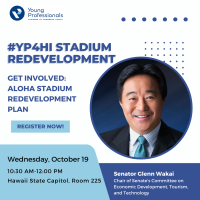 Aloha Stadium has been the home for the University of Hawaii Warrior football team and has hosted numerous other sporting events, concerts, and graduation ceremonies since 1975 – bringing together the community.

Given the cost of repairs necessary to keep the facility safe and operable, the Aloha Stadium Authority made the difficult decision to close the stadium at the end of 2020.  Demolition of the stadium is expected to begin in 2023.

For the past several years, there has been spirited debate about how to redevelop the space.  Do we build another large stadium?  Do we build hotels, retail stores, and other commercial spaces?  Do we construct affordable housing?

Come learn about the current plans for the New Aloha Stadium Entertainment District (NASED).  Senator Glenn Wakai, chair of the Senate Committee on Energy, Economic Development, and Tourism, will present on the NASED and seek your feedback and ideas on how to make redevelopment of the stadium a success.

YP4HIs are a great way for you to make your voice heard.  Most of the time is dedicated toward you, our YP members!

Event proceeds to be donated to Hawaii State Library.

Glenn Wakai is in his second term as a Hawaii State Senator, following eight years in the State House of Representatives. He is the current chair of the Senate's Committee on Economic Development, Tourism, and Technology, vice chair of the Committee on Public Safety, Intergovernmental, and Military Affairs, and is a member of the Committees on Human Services and Ways and Means.

In 1991, Glenn began a career in television news by working as a reporter/anchor in Guam and Saipan. He later returned home to work for KHON-FOX2 and KHNL NBC 8.

After 11 years in news, Glenn set aside his microphone to pursue his passion for public service. In November 2002 he was elected to the Hawaii State House of Representatives and was re-elected in '04, '06, and '08.

Outside of the legislature, Glenn is President of a public relations firm, High Impact Communications. He also runs a non-profit organization, Reach out Pacific (REPAC), which takes surplus medical and educational equipment to Pacific Islands.

Glenn is a graduate of Mid-Pacific Institute and the University of Southern California. 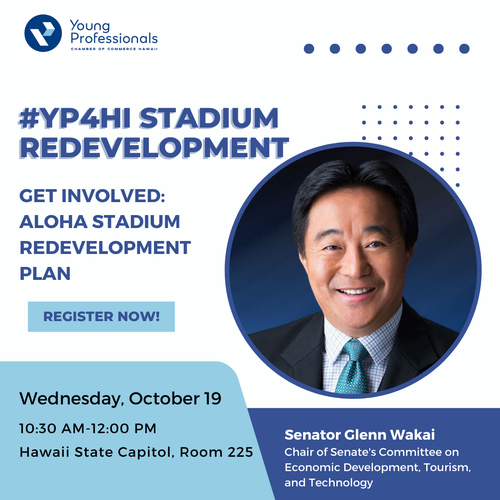