Click Here to view the Chamber’s Event Schedule for 2023 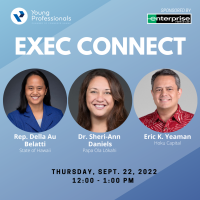 Join the YPs for this intimate lunch event with three of Hawaii's premier business leaders. This is open to current YP members only and limited to only eight YP members per executive. Sign up NOW to attend this great "talk story" luncheon and learn from these accomplished business and community leaders! 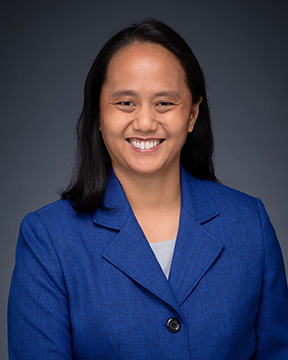 Representative Della Au Belatti is a graduate of Princeton University and the William S. Richardson School of Law at the University of Hawai‘i, with a certificate from the Environmental Law Program. She is a practicing attorney with the Law Office of Eric A. Seitz and is currently serving her eighth term as the Representative of State House District 24 (Makiki, Tantalus, Papakolea, McCully, Pawaa, and Manoa). Representative Belatti is a former high school social studies teacher and has served as a State Campaign Spending Commissioner. 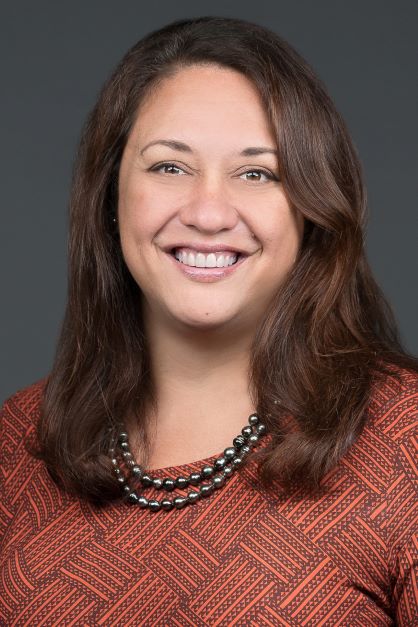 Sheri-Ann Daniels assumed the helm of Papa Ola Lōkahi in April 2016.
Born and raised on Maui, Dr. Sheri-Ann Daniels is a graduate of the Kamehameha Schools - Kapālama campus. She holds degrees in the field of counseling psychology and has several license certifications.  She has more than 25 years of experience in social services programs across Hawai’i in both the non-profit and government sectors.

She was recognized in 2014 with the Maui County Women of Excellence award. Other awards include the Pacific Business News - 40 under 40 (2010) and Ka Ipu Kukui Fellow (2008).  She is actively involved in various community organizations on Maui, including Hawaiian Language education.

Beginning in early 2020, Sheri shared co-leadership for the Native Hawaiian & Pacific Islander Hawaii COVID-19 Response, Recovery & Resilience Team (NHPI 3R), for which Papa Ola Lōkahi served as the backbone organization.  Committed to meeting the needs of our community through public policy and strategic partnerships, she was named among the Pacific Business News' 2022 Women Who Mean Business. 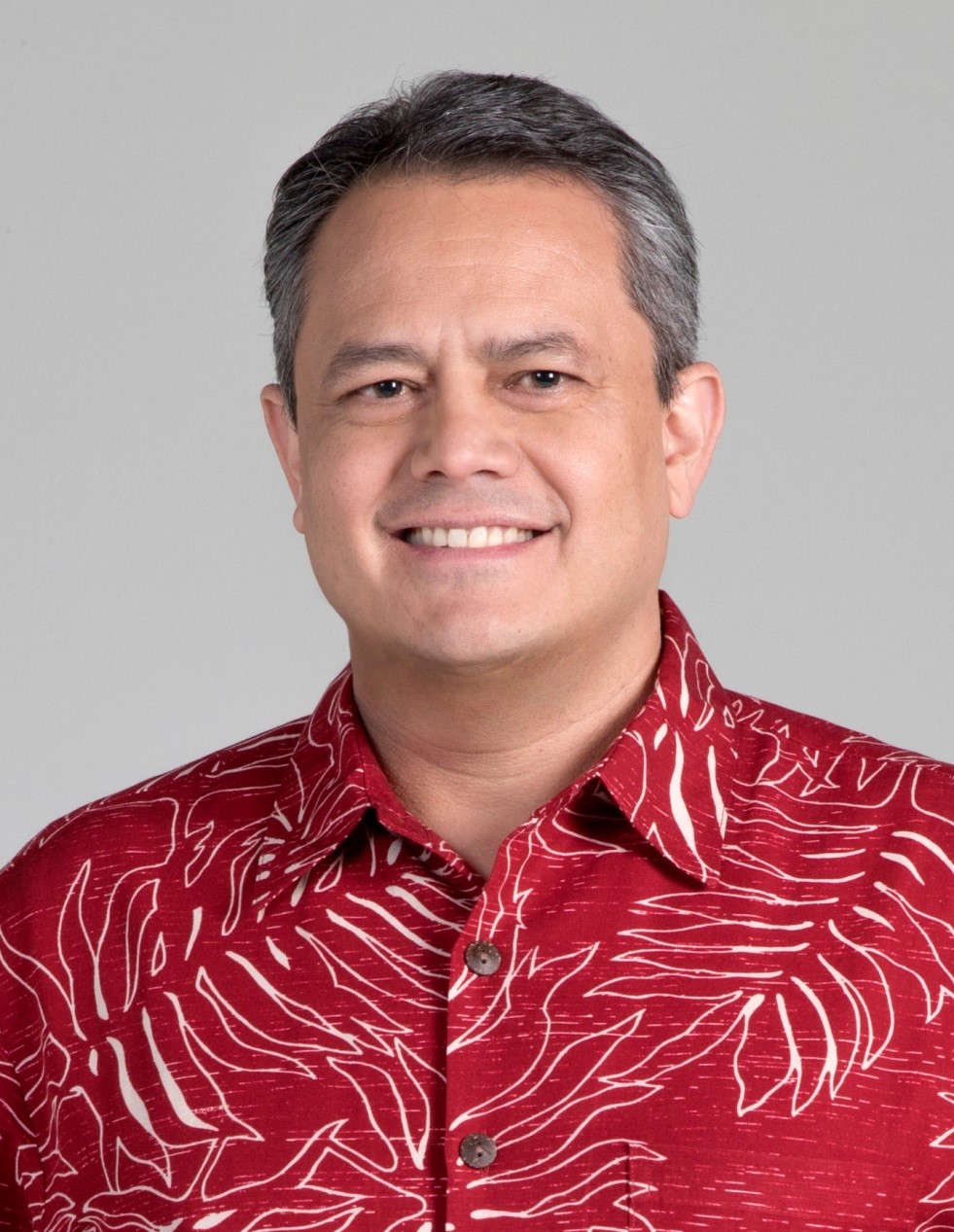 Eric Yeaman is the Founder and Managing Partner of Hoku Capital LLC (Hoku). Hoku was founded in August 2019 to provide strategic advisory services (including M&A) and to invest in local and national venture capital, private equity and real estate opportunities. Prior to Hoku, Mr. Yeaman was the President and COO of First Hawaiian Bank from 2015 to 2019. At First Hawaiian, he oversaw Strategic Planning, Investor Relations, Retail Banking, Consumer Banking, Enterprise Technology, Enterprise Operations and Bank Properties. He was instrumental in assisting First Hawaiian (NASDAQ: FHB) in becoming a publicly traded company through its IPO and multiple secondary offerings totaling over $3.8 billion. Prior to joining First Hawaiian, Mr. Yeaman was President and CEO of Hawaiian Telcom from 2008 – 2015 where he successfully led the company through its Chapter 11 bankruptcy proceedings and its process to become a publicly traded company (NASDAQ: HCOM). He also led the company’s return to profitability and growth as well as its transformation to become Hawaii’s technology leader with the launch of Hawaiian Telcom TV, 1 Gigabit internet speeds, data center and advanced cloud-based services. Prior to these roles, Mr. Yeaman served as COO of Hawaiian Electric Company, Inc. from 2007-2008, CFO of Hawaiian Electric Industries, Inc. from 2003 - 2007 and COO/CFO at Kamehameha schools from 2000-2003 before beginning his career at Arthur Andersen LLP from 1989 -2000.

Active in community affairs, Mr. Yeaman currently serves as the Chairman of the Board of Alexander & Baldwin (NYSE: ALEX), and as directors of Alaska Air Group (NYSE: ALK), DR Fortress, Lanihau  Properties, LLC and Palani Ranch Company, Inc.  He is also on the nonprofit boards of the Harold K.L. Castle Foundation and Friends of Hawaii Charities.

Mr. Yeaman was honored by the Sales & Marketing Executives of Honolulu as the 2017 Salesperson of the Year and was also honored as one of the University of Hawaii Alumni Association Distinguished Alumni in 2016. He was also named Hawaii Business Magazine’s CEO of the Year for 2011. In 2010, he was inducted into the University of Hawaii’s Shidler College of Business Hall of Honor.

Mr. Yeaman was born and raised in Kona, Hawaii, and earned his Bachelor of Business Administration degree (with distinction) in accounting from the University of Hawaii at Manoa and is a certified public accountant in the State of Hawaii. 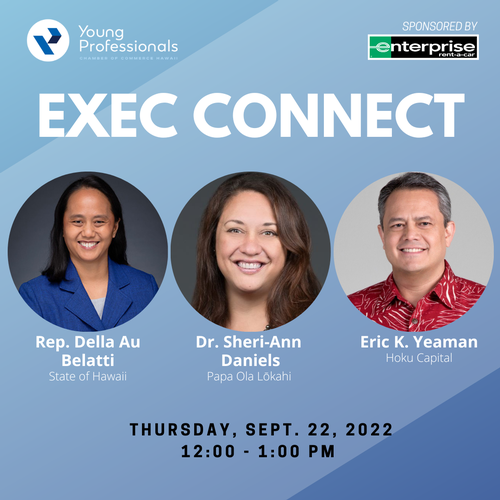 Please make note of the Pacific Club dress code: Business, Business Casual, and Aloha Attire are acceptable for both men and women. Jeans, shorts, collarless shirts, gym shoes, rubber slippers, open toed shoes for men, and any other clothing that would be considered revealing are NOT PERMITTED.

In consideration for participating as a guest in any Chamber of Commerce Hawaii event, I agree to hold the Chamber of Commerce Hawaii harmless and release it from any liability arising from any lost, missing stolen or damaged personal property at any of its events. Please keep all personal property under observation or secured.
​
This event is being photographed and videoed.  By entering, you agree to the use of recordings of you in connection with editorial, promotional, and/or advertising materials relating to this event or our other events in any media.  Please inform our photographer if you do not want your image used in this manner.