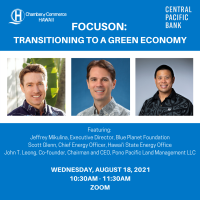 Join the Chamber of Commerce Hawaii and a panel of experts for a discussion about moving Hawaii forward as we transition to a green economy.

This past year the United States has seen some of the hottest temperatures on record, and extreme weather events are becoming an increasingly regular occurrence around the world. Hawaii is already leading the way in many categories, with government and the private sector working together to address climate change by signing new measures into law and committing to decrease carbon emissions. Join our panel of experts as we explore how the transition to a green economy will play out in the coming years, and what our local businesses can expect as we move toward the goal of carbon neutrality.

With experts from both non-profits and state government, this webinar will provide a window into future of energy and climate policy in Hawaii, and help businesses understand their role in moving Hawaii forward to an energy efficient future.

Jeff Mikulina is the executive director of the Blue Planet Foundation, a nonprofit organization whose mission is to accelerate our transition to a just and sustainable energy future. Jeff heads all aspects of Blue Planet's work to champion scalable policies and programs that transform Hawaii’s energy systems to clean, renewable energy solutions.

Among other accomplishments, the organization led the successful public campaign to make Hawaii the first state in the nation with a 100% renewable energy mandate. Jeff received a Master’s of Science degree in engineering from the University of Illinois at Urbana-Champaign with a specialty in decision theory.

Scott Glenn is the Chief Energy Officer of the Hawaii State Energy Office, a post he was appointed to on October 16, 2019 by Gov. David Ige. As the CEO, Scott develops, manages, and implements statewide programs for energy efficiency, renewable energy, and clean transportation to help achieve a resilient clean energy economy.

Scott has served as director of the Office of Environmental Quality Control (OEQC) since 2015 where he led the modernization of the state environmental review process by developing new administrative rules and updating best practices. As the OEQC Director, Scott advised the Governor on environmental quality. He was tasked with public education and outreach, conducting research, submitting and providing testimony on legislative initiatives, recommending programs, and providing advice and assistance regarding Hawaii’s environmental review process. Scott also sat as an ex officio voting member on the Environmental Council, the Advisory Committee on Plants and Animals, and the Emergency Response Commission.

In addition, Scott was the co-chair of the Sustainable Hawaii Initiative, and liaison to the U.S. Climate Alliance – a coalition of U.S. governors committed to the Paris Agreement. In these roles, he worked with state, county, and federal agencies, as well as communities across the state, and stakeholders nationally and internationally to coordinate state policy development on energy, climate change, and key sustainability initiatives.

Scott received his Master’s Degree in Urban and Regional Planning from the University of Hawaii in 2009. Scott specializes in asset management, environmental planning and compliance, environmental review, and climate change adaptation planning

John Leong’s passion for creating a more resilient Hawai‘i is the inspiration and foundation for his ground-breaking work and accomplishments. As an environmental entrepreneur, Leong has helped to develop Hawai‘i’s green jobs industry, increasing conservation awareness and creating career opportunities in natural resource management and sustainability. After graduating from the Wharton School of the University of Pennsylvania in 2000, Leong founded Pono Pacific Land Management, LLC, a conservation and land management services company. Pono Pacific is the only comprehensive, private natural resource management company in Hawai‘i, which today impacts important conservation, agriculture, and other lands throughout the state. Striving to continually innovate the company and its services, Leong has bridged Pono Pacific’s long-term conservation management goals with revenue-generating, land-based sustainability projects including reforestation, local food production, and renewable energy.

In 2007, Leong co-founded non-profit organization Kupu, to cultivate positive environmental impact by focusing on developing Hawai‘i’s next generation of environmental stewards and community leaders. Kupu’s youth conservation and sustainability programs provide environmental and cultural education and experiences, as well as personal and professional development opportunities. Over the past decade, Kupu has helped to engage young adults statewide, many who have since established successful education and career pathways in conservation and sustainability. Through its innovative programs and partnerships, Kupu has hired and impacted over 5,000 young adults and generated a total of more than $155 million in economic impact for the state, with a 1 to 3 cost-to-benefit ratio.

Leong serves on Alexander & Baldwin and Island Insurance’s board of directors as well as several non-profit boards and associations such as the City and County of Honolulu Resilience Strategy Steering Committee, Metro YMCA of Honolulu, Hawaii Institute for Public Affairs (HIPA), Lambda Alpha International (LAI), UH Sea Grant, and Trust For Public Land.

Born and raised in Hawai‘i, Leong is a graduate of Punahou School. He is married to fellow high school alumna and Pono Pacific and Kupu co-founder Julianna Rapu Leong. Together they have four amazing children and live in Honolulu, Hawai‘i. 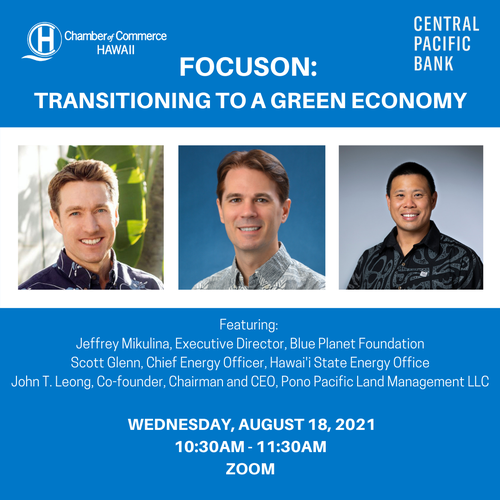