Please check individual event listings below for notices of postponement, restrictions or transition to webinars. Additional webinars are forthcoming. Please check back for updates. 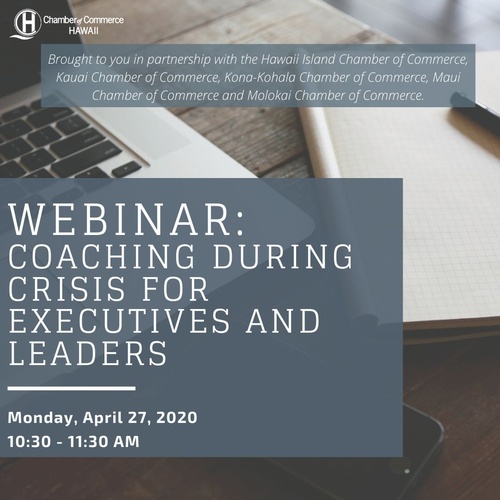 The stresses of COVID-19 and other crisis, can take a major toll on executives and leaders of organizations. Hear from Grace Keohohou Hao, President & Co-Founder of the Coach Excellence School, and William Martin, President & Founder of The Initiatives Group on how to lead in a crisis and stay strong for the betterment of your organization and household.

The stresses associated with working outside of the office, now in isolation, coupled with the kids at home and out of school, and the constant alerts, distractions, alarms about our global economy and uncertainty, are taking a toll on executive efficiency and effectiveness.

This webinar will help you to manage your emotions, effectively communicate and lead your teams through the storm. Additionally, you will get the opportunity to hear lessons from a former general and strategies to help people both in the boardroom to the battlefield - to effectively navigate situations of great complexity and consequence.

Grace Keohohou Hao co-founded the Coach Excellence School in 2007. After being exposed to entrepreneurship her entire life, Grace is now grateful to be reaching leaders in more than 30 countries through her speaking, writing and educational programs. Grace is a co-author of several Best Selling Books including, Build it Big, More Build it Big and Mom Entrepreneur Extraordinaire. She is a Certified Coach with the Coach Excellence School and Worldwide Association of Business Coaches (WABC) Certified Business Coach (CBC). She recently received the honor of being named the National Advocate of the Year for Working Mothers and Outstanding Mother of the Year by the American Lung Association. Grace loves being a devoted wife, mother of 8 amazing children and enjoys serving profitable corporations, educators, leading executives, and non-profit organizations.

William Martin is the President and Founder of The Initiatives Group, a consulting firm that specializes in leader development and executive coaching. He is a retired US Army Officer, former Deputy Adjutant General of New York during 9/11, former Ranger and Paratrooper and combat veteran. Following his military career, and for almost 20 years, he has been assessing, coaching and advising business leaders across the globe.

Synthesizing the leadership philosophies and techniques from the U.S. Army and adapting them to the world of modern business, Martin has transformed countless companies and lives of leaders, including Fortune 500 companies.